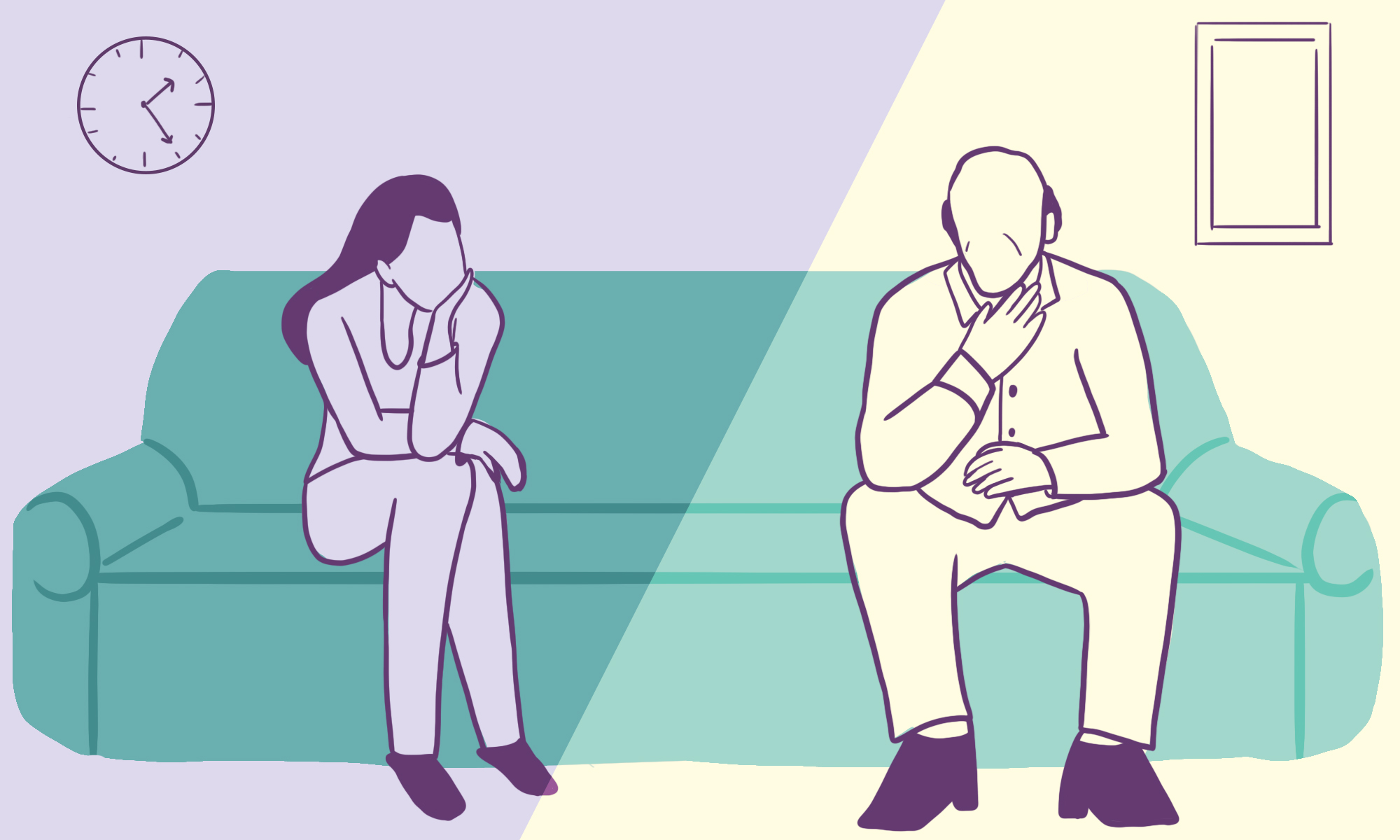 Despite seeing what therapy and medication did for his children, it was difficult for this father to come to terms with the fact that he needed support for his mental health too. Illustrations by (c) Reset Fest Inc, Canada

I come from a very small town in West Bengal called Malda, I basically grew up in a village. My father has lived almost all his life in the village. I left home at 16 after my grade 10 [exams] and moved to Kolkata.

In a new place by myself, I was sexually abused by my sole local guardian at the time and I didn’t think that something wrong [was] happening [to me] because I’d experienced sexual abuse since my early childhood. The abuser was my father’s college classmate and he knew I had a very strained relationship with my father.

My father was not physically abusive, but [the dynamic] was emotionally disturbing. It was always tiny fights and he had anger issues. I always tried to avoid conversations and I was always apprehensive of talking to him. I would either change the subject,  avoid it or I would predict what he would say to protect myself from getting hurt. It takes a toll on you when you are continuously [afraid of] what is going to happen. You then stop opening up to your parents, and people take advantage of that because they know you cannot go and tell your parents what is happening.

We were always pressurized to study more and “become something.” I think my dad wanted to do a lot of things but didn’t really put in the effort. So that unrequited ambition, [he] projected onto his kids. My dad looked after some of the properties that we owned but he never really had a job. My mother is the primary breadwinner and she has always been the overachiever in their relationship.

Once my brother and I moved out, the [conflicts and confrontations] that would occur between us, he started projecting those on to my mother. I realized very early on that…this [behaviour] was unhealthy, that my father needed help and I kept [bringing it up]. It took me almost seven years to finally get him to a place where he was willing to listen. Initially, he even refused to pay for my [mental health treatment] when I [reached out] and said that I needed help.

On a phone call, Dyuti’s father shared his apprehensions about talking to a therapist and seeking medical intervention for his mental health.

I’ve [had a difficult journey] with my mental health and in 2016, I went to therapy right after a suicide attempt but [didn’t continue due to college commitments]. In 2018, when I moved to Delhi, I felt like my life was breaking apart, I was facing [health issues] and a very toxic workplace. That kind of broke me so I knew I needed to go and [get professional mental help] and that’s when I was diagnosed with borderline personality disorder (BPD) and comorbid depression. At this point, I could finally go for therapy because I was earning for myself and saving up for it. Going on medication…helped and therapy helped me recognize and break out of patterns caused by the disorder. With BPD, you tend to indulge in risky, impulsive behaviour but over time I have learned to [do other activities] that won’t sabotage my happiness.

Despite seeing my brother’s improvement, my father didn’t want to go to therapy because of the stigma that is attached. Nobody wants to see themselves as mentally ill, especially in a small town.

While I was away, my brother was at home when he started experiencing symptoms and was eventually diagnosed with obsessive-compulsive disorder. [It was aggravated by] the pressure to get into medical school, and the passing of our grandmother also [took a toll on him]. But with therapy, he started getting better and my dad saw that. My father was the one who took him to and picked him up from therapy and he also took it more seriously because OCD sometimes has more physical symptoms that you can see, but something like BPD is more internal.

Despite seeing my brother’s improvement, my father didn’t want to go to therapy because of the stigma that is attached. Nobody wants to see themselves as mentally ill, especially in a small town.

When I finally convinced him, he was confused as to what he would even tell the therapist and I told him to [treat it how] he would if he was going to a doctor for a physical illness. To start, I told him to tell me what he was feeling and he said he was always petrified, especially about not knowing what lies ahead. He was worried about financial issues, there was paranoia. Over our conversation, he realized that things are not in a good place and understood that his mental health was also possibly aggravating some of his [physical symptoms] like high blood pressure, so he agreed to seek support.

He [went to] a psychiatrist the next day and later started going to a therapist as well. He was eventually diagnosed with bipolar disorder comorbid with generalized anxiety. He got medication and we ended up taking different variants of the same medication.

Around two weeks after he started medication, he called me and said, “So normal people feel like this without medication?” and we laughed about it and it was nice because I could understand that sentiment, and I could feel that he was not paranoid anymore.

Also read: How Indian Families Are Moving Past Stigma to Talk About Mental Health

His mental health has improved remarkably, it is a 180-degree shift. He is happy, we talk every day now. It has improved the relationship between my parents. This entire COVID-19 lockdown, he has diligently helped my mother by doing his share of the housework. I think he is a much better husband to my mother and a better father to us. The environment in the house is more relaxed now; he has started gardening. He is investing himself in things and not sitting idle all the time. He isn’t spending time overthinking which has impacted him significantly because he is now being productive.