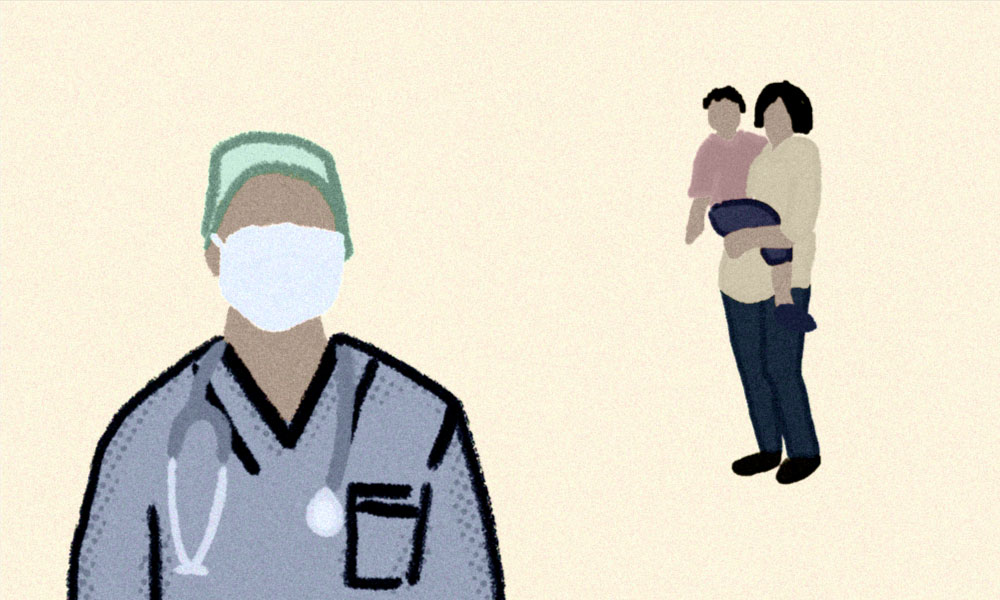 It’s been a week since Abhisek Biswas’s wife was put on COVID-19 duty in a private hospital in Kolkata, India. Along with his six-year-old son, father suffering from dementia and mother with acute arthritis, the joint family has been struggling to sleep. They spend a lot of their days crying, and cannot speak to her much. She is exhausted when she returns to the government-mandated quarantine facility near the hospital, with sleep occupying most of her remaining time.

“What can we do for her?” Biswas told Re:Set. “We are only able to give her emotional support, talk to her a lot and ask her to stay safe. We are doing video calls so she can see us. That makes her very happy.”

Nurse Biswas is doing 12-hour stretches from 8 pm to 8 am in a COVID-19 ward wearing a hazmat suit. She can’t urinate or drink for that time period, so when she reaches the facility, she’s dehydrated, tired and has a terrible bodyache. Her family hasn’t seen her for seven days.

When she’s done being on-call, she’ll have to isolate herself in one corner of the house for 14 days. “It’s war time, but we live in terrible fear that she may be infected in the coming days,” Abhisek added.

It’s the wait which kills.

In New Delhi, Aashna Joshi (name changed upon request to protect her family’s privacy) got a call last week from her brother in the United States. He’s an oncologist there in his late 20’s. “He called and told us he was on the [hospital] roster for doctors who would treat COVID-19 patients, so his turn would be coming soon,” Joshi told Re:Set.

This past week, his turn did come. And after working for just two days in a ward, the frequency of video calls to his family reduced. Their parents are doctors and would’ve figured something is off, so he just didn’t speak with them. “I just had a feeling something was wrong. He called, with a swollen face, and said, ‘you know, I have a high fever,’” Joshi told Re:Set. “Destiny,” she exclaimed.

Her brother has tested negative for COVID-19 and has been in complete isolation since the outbreak because he deals with cancer patients, who are especially vulnerable to contracting the disease. His friends dropped off a food basket outside his home because he hasn’t met anyone for weeks. His parents still don’t know he’s ill.

“I was overwhelmed when I got the news and just cried,” Joshi told Re:Set. “He’s so far, I can’t help him. Right now I’m feeling OK because he’s quarantined, but when he’s well again he will be put on COVID-19 duty because numbers there are so high. What can we do?”

Long distance caregiving is a novel, under-researched subject. Sara L. Douglas, lead investigator of a study called “Closer: A Videoconference Intervention for Distance Caregivers,” laid bare its effect on those trying to support friends or family from a distance. In an interview to The New York Times, she said, “Distance caregivers, compared to local caregivers, have higher stress, feel less support, have higher anxiety and more burden.”

Dr. Ragini Ganguly, based out of Texas, is seeing this first hand with her 27-year-old daughter, an infectious diseases fellow, who is battling COVID-19 duty eight hours away in a New Orleans Hospital. The city is one of the worst hit in the United States.

“It doesn’t get as much attention as it’s not New York, [it] has lots of minority communities,” Dr. Ganguly told Re:Set. “My daughter is a little delicate. She has asthma and falls ill easily, and we don’t know anything about this disease. It’s so deadly.”

Just before the state had gone into lockdown, Dr. Ganguly put together a large care package for her daughter, driven to her by gracious family friends. The package included a mask normally used for snorkelling, because of the lack of personal protective equipment in various hospitals. She also sent her daughter some frozen chicken, rice, and a gun, because the streets are empty, and she fears for her daughter’s safety even outside the hospital.

“We don’t have guns in our homes, but we are scared, so what to do?” she said. “It’s her job, she can’t leave even if her life’s in danger. So we pray to god everyday, to protect her.”

Like Dr. Ganguly, California-based Sangeeta Chopra is going through something similar with her daughter, a fellow in geriatrics, who is on COVID-19 duty in New York City.

Chopra had a panic attack the same day as our interview. Watching the news, despite her daughter telling her not to, causes her stress and anxiety everyday. She also recently came to know that her daughter had run out of disinfecting wipes at home, so Chopra went around looking for some. The shelves were all empty, so she tried online. She booked packages of an overpriced one from the only website she could find, and later realized that the wipes would never come, as the website was based out of Hong Kong. She’s again on the hunt for wipes.

“It’s difficult for parents. I don’t even talk to her in the mornings, because she has to go work and we don’t want to show her that we’re worried,” Chopra told Re:Set. “She needs our strength right now.”

Want to Distract Yourself? Here Are Some Good News Stories To Warm Your Heart
How Kids Are Celebrating Their Birthdays During COVID-19