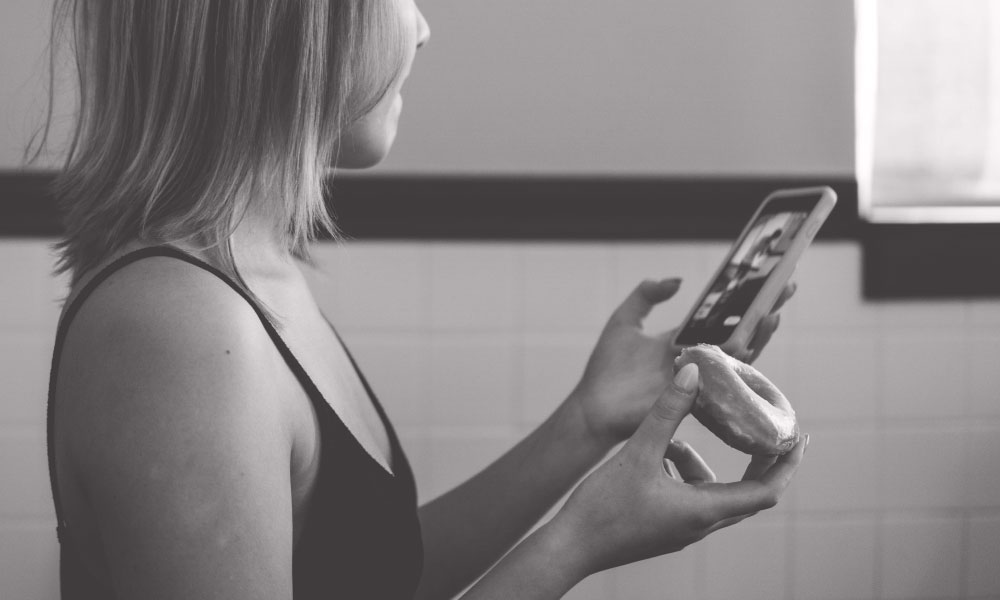 For young people, social media creates the pressure to ensure that their body looks a certain way even if it means resorting to extremely unhealthy habits. Photo courtesy: Unsplash

“You’re almost as big as your mother,” my father remarked to me, and at that moment I had to pretend like those words didn’t dent my already waning self-esteem at age 14. Anyone who has grown up “chubby” knows that it doesn’t take much to push you down the path of disordered eating. From that point, I gradually cut down portions, forced myself to always eat on the smallest plate I could find, and basically deprived myself of the joy of eating. I didn’t realize how unhealthy my habits had become until I blacked out on the kitchen floor because I hadn’t had a full meal in days.

My mid-teens coincided with the time that Tumblr was gaining popularity, it was where I eventually found #Thinspo, a hashtag that leads you to ‘thinspiration.’ It seems pretty harmless, but scroll a little deeper and the content that is so easily accessible is difficult to stomach.

From pictures of rail-thin models that serve as an inspiration to tips on how to starve, these hashtags encourage people to pick up dangerous, sometimes even lethal new habits or encourage them to stay on their journey to thinness.

Doing a social media audit is key if you have experienced an eating disorder or related thoughts. Photo courtesy: Unsplash

In 2012, Tumblr announced a new policy that attempted to moderate self-harm related content on the platform, including the glorification of eating disorders like bulimia and anorexia. So now, when someone searches for terms like anorexia, they are met with a message asking if everything is OK and pointing them to treatment and support options for eating disorders.

But, it still gives you the option to view the search results, thus making the content accessible to those who are seeking it. Tumblr did not respond to our request for comment on how they were dealing with this issue on their platform.

Meher Ghufran, a UAE-based marketing executive, was 16 when she recognized that she was experiencing symptoms of an eating disorder. Starting out with fasting, she would restrict her consumption despite not eating for nearly 14 hours. This continued for months “until the acid reflux I experienced became severe and I could no longer eat without throwing up.” Ghufran’s situation worsened and she was hospitalized for stomach cramps and intense fatigue.

Social media platforms have had an important role in Ghufran trying to downplay the seriousness of her illness, “I saw many document their struggles with eating disorders [through] pictures and poetry. Seeing it made me feel less alone and less weird.” She admitted that it normalized the unhealthy behaviour and made her believe there was no real harm.

“I am aware of pro-ana. I found those terms on Tumblr and Instagram. I don’t follow the hashtag, but I have searched for them online,” the 23-year-old told Re:Set. Pro-ana and pro-mia are used to denote pro-anorexia and pro-bulimia.

From 2012 onwards, Instagram made the move to cut back on access to eating disorder-related content by banning such tags. But the community responded by intentionally misspelling or changing letters in the tags to get around these bans, as revealed in a report by the Georgia Institute of Technology.

On the other end of the moderation spectrum is Twitter where such tags are still easily discoverable. Despite the fact that eating disorders have the highest mortality rate of any mental illness, there is no dearth of tweets that promote these conditions. People also turn to the platform for a sense of belonging, most prominently through ‘ed gc’ which are eating disorder group chats where they encourage each other to restrict their diets or fast, with some members being underage as well.

A spokesperson for Twitter told Re:Set that the promotion of self-harm, including eating disorders, is not permitted on the platform. They added that they do allow conversations focused on research, advocacy, and education of self-harm prevention.

Eating disorder-related content has also found its way onto TikTok, a newer platform that is a growing favourite among teenagers. From influencers giving recipes of beverages to aid weight loss to the promotion of unhealthy eating habits, young people don’t need to make much effort to come across content that could potentially trigger disordered eating.

Social media algorithms quickly pick up if you are interested in a specific topic thus making it easy for people with eating disorders to suddenly only get content that is targeted to them.

A spokesperson for TikTok clarified to Re:Set that the platform continues to focus on building protective measures and in-app resources for the community. They added that content revolving around eating disorders is against their community guidelines and they encourage users to report any such violations.

Being exposed to such posts creates a sense of safety and community for people experiencing the symptoms. “It also leads to [them wanting to remain] a part of the community or wanting to ‘win’ by eating less and appearing more committed to their eating disorder,” commented Dr. Stephanie Zerwas, a clinical psychologist and therapist specializing in eating disorders.

Zerwas observed that despite the filters that exist on social media to reduce the accessibility to such content, “there will always be new technology and new places [where] people will meet up online.” She emphasized that social media algorithms quickly pick up if you are interested in a specific topic thus making it easy for people with eating disorders to suddenly only get content that is targeted to them, such as extreme exercise videos. This helps normalize it in the mind of the person viewing.

“Seeing influencers in bikinis or workout gear on Instagram and then comparing a picture of yourself to that influencer can lead to lots of body shame and embarrassment.”

Moderation of such content, whether by humans or by machine, has its limitations too and it is not easy to flag some which may be borderline triggering.

Zerwas noted that in her experience, comparing one’s body to other people’s bodies online can be really unhealthy. “Seeing influencers in bikinis or workout gear on Instagram and then comparing a picture of yourself to that influencer can lead to lots of body shame and embarrassment.”

For Ghufran, a popular model on Instagram had sparked her need to observe her eating habits, she said, elaborating that although she has unfollowed the person, she still occasionally visits their profile which makes her feel guilty. But she maintained that unfollowing YouTubers and other influencers who promote unattainable standards of beauty has been an important part of her journey to recovery.

Also read: Why Teenagers Are Feeling the Pressure to Lose Weight During the COVID-19 Lockdown

Zerwas believes that doing a social media audit is key if you have experienced an eating disorder or related thoughts. She advised people to reevaluate through their own social media with a trusted friend. “If your feed is dominated by pictures of food, fitness videos, emaciated influencers, it’s time to start muting or blocking accounts to reset and retrain the algorithms that send you content,” she said.

For parents of young teens, Zerwas suggests having an open dialogue early and often about how images posted online are easily manipulated with photo software.

She reiterated that it is important to acknowledge that people with eating disorders aren’t making up the social pressure to be thin. She believes that it is necessary to understand the unhealthy culture that indulges in body shaming and propagates thinness. Zerwas added, “life can be more exciting and full of meaning even if it also means being at risk for criticism about your body.”

If you or anyone you know is experiencing symptoms of eating disorders, please consider consulting a doctor or mental health practitioner. You can also find eating disorder support resources and information for your region on Eating Disorder Hope.

A Therapist on Her Mental Health During COVID-19 and Black Lives Matter
TikTok Ban: How Suddenly Being Cut off of Social Media Apps Affects Mental Health