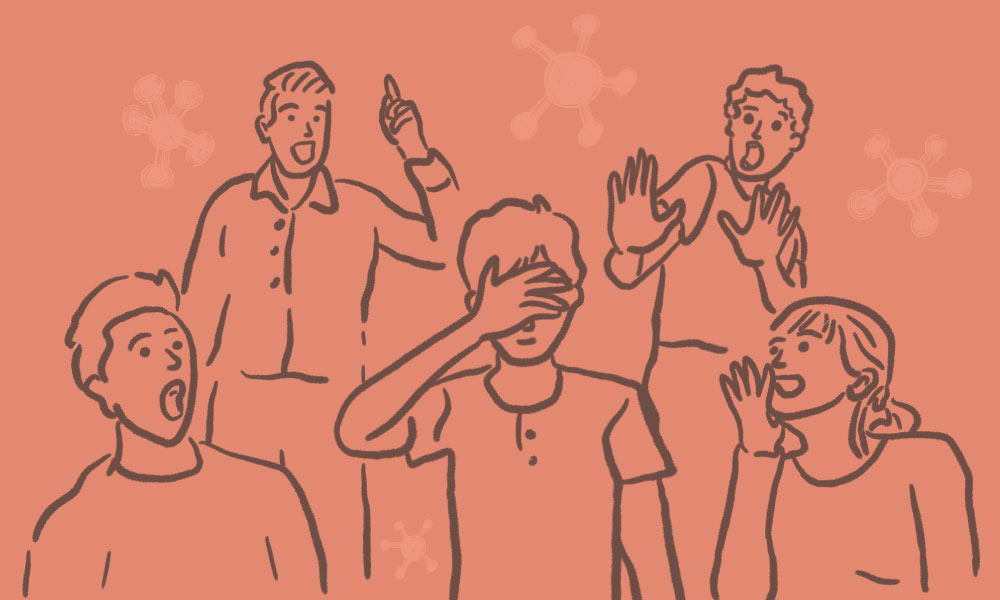 “Hi I’m Kovid, just like the virus, but with a K.” Illustration by (c) Reset Fest Inc, Canada

The novel Coronavirus pandemic has affected every facet of modern life, from mental health, to the global economy and to the very idea of how we work. One of the more trivial issues were the memes that spurred of Corona beer. There was even fake news that the beer maker was willing to pay $15 million to change the name of the virus.

The other name to have gone global is COVID-19, and for some, this has meant an interesting turn of events for people named Kovid, which, according to thenamemeaning.com, means, “Academic.”

To understand the effects of this sudden infamy, we reached out to people named Kovid in India. Many didn’t want to speak about it. The rest thought it was a bad joke like those they’ve been subjected to for months, but it wasn’t.

People read my name from Truecaller, then ask me if it’s my real name. Then they ask me who gave it to me, so I say my parents who else. My parents gave it to me thinking it’s unique and special. They were in complete denial and didn’t believe anyone could equate the two. They didn’t want to take the blame.

There’s been an evolution in my name’s journey. In school, they used to call me Govind, so much so that one time I had to write it on a blackboard and tell other students how to pronounce it. By the time I came to college, Mr. Ram Nath Kovind became president. So then everyone pronounced it as Kovind. It was never Kovid.

So in February, when my flatmate told me about the COVID-19 virus spreading in China, initially I was relaxed because it was far away. Then in March, my friends started texting me saying you’ll be all over the news, even my teachers from school texted me saying, “Hello Kovid, how are you? You’re in the news.”

Sometimes I replied, “Yes, I’m in the news and I’m causing thousands of deaths all over the globe.” They think they are very funny by making this joke, and no one has thought about it.

“It even made my job interviews interesting.” Photo courtesy: Kovid Soni

I was quite upset then, but with time I realized that it made it easier for me to explain my name. At my therapist this week, for example, I said, “My name is COVID-19 sir, with a K.” He gave me a grave look then smiled. Now people at least know how to pronounce my name correctly. I stay upbeat about it, and haven’t really let it affect my mental health.

It even made my job interviews interesting, because recruiters ask me about it, if I’ve been made fun of for it, which is nice. I mean, how many times can you say your name and have people stop in their tracks?

I already have an elevated sense of ego and this fuelled it further. Sachin Tendulkar worked his entire life but Donald Trump still couldn’t pronounce his name, but he can pronounce mine properly. It’s quite cool.

I even finally got one over my parents. They have been giving me stick all my life about studying more, doing something else with my life and that I made many mistakes, but now I go to them and tell them you made the biggest mistake!

Whenever I’m introducing myself to people now, I say. “Hi I’m Kovid, just like the virus, but with a K.” Initially at work I felt pathetic because my colleagues would just see me and go to wash their hands. I was like an alarm clock for personal hygiene.

All my clients love it too.

But with time it got better as I realized I can’t change anything, so I might as well not feel bad about it and make the most of it.

Everyone lets their guard down when ahead of a meeting my colleagues say, “Kovid is on the call.” Even while looking for new business, there’s always one person on the call who has never heard of this and just cracks up. It’s great. I make this joke all the time.

The one time it went really bad was when I was speaking to this woman from Lucknow. I made the joke, and all of us on the call laughed, but she didn’t and then told us her husband isn’t working anymore because he has COVID-19.

I realized I have to not use it all the time, but apart from that, it’s been great. I mean I can use this as a conversation starter at an international level. All my clients love it too.

It has been a headache.

I saw this coming and somewhere I thought that people won’t pay heed or mention it considering we all are mature enough now. To my surprise, I was wrong. I had senior managers and others cracking a joke on how they are afraid of me now.

It was everything that was wrong with society. Finding a rhyme and dancing to it before giving it a second thought.

Jain decided to post this message on her Instagram in a bid to get people to be more sensitive. Photo courtesy: Kovid Jain

Additionally, it was exhausting mentally because suddenly there was a lot of unwanted attention from people I haven’t talked to in ages. However, what concerned me more was how amidst a pandemic, where people are dealing with mental health challenges and depression, not one person who pinged me realized how unwanted this mockery is.

I was furious and put up a rather rude post on Instagram that it isn’t fun and later a lot of people understood and apologized. The only saving grace was that none of my friends made these jokes and that made me proud.

Now, I just ignore people who text me “COVID-19, how are you?” messages. I feel they don’t deserve my attention.

How the Lack of Physical Intimacy Affects Relationships
Can Spending More Time in Front of the Screen Benefit a Child’s Mental Health?

COVID With a K: How Indians Named Kovid Dealt With the Pandemic