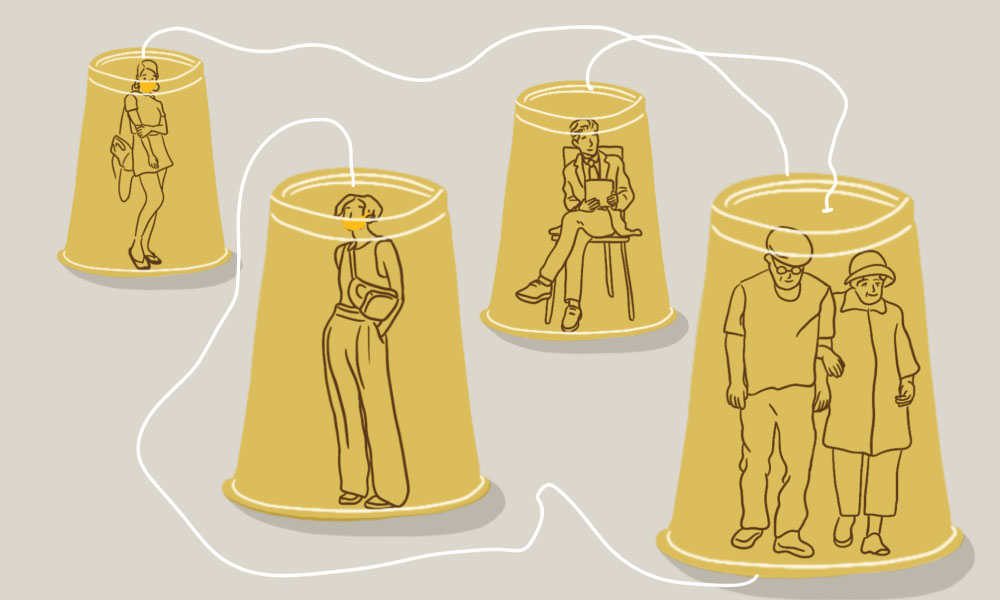 “What we thought of as normal before COVID-19 is gone.” Illustrations by (c) Reset Fest Inc, Canada

It’s been a tumultuous year for Chhavi Mittal Goel. The Delhi-based psychologist got married, a month later India went into lockdown to control the spread of COVID-19 and she was laid off as an assistant professor when the education sector took a hit because of the pandemic. The worst phase was in June, when members in her extended family tested COVID-19 positive, then she got infected, and then her in-laws.

“A total of 16 people,” Goel told Re:Set. “I was already adjusting to a new space, then I became the person who was infected and put the lives of in-laws at risk. That’s a very difficult dynamic in an Indian joint family setting. Even if they don’t say it, you wonder if people are thinking it, and blaming you.”

Despite two people being admitted to the hospital, all 16 members of her family eventually recovered from their bout of COVID-19.

The University of Idaho published a study recently where they found, “people who reported high levels of quarantine also reported higher levels of depression, and in some cases, PTSD symptoms.” Some countries, like India, have been in various phases of a lockdown since March. According to the Population Foundation of India, one in four young people in Uttar Pradesh, India’s largest state, went through depression due to the lockdown.

“In India, we have so many stratifications and policies that will take years to implement.”

The mental health repercussions could be even worse for survivors.  Psychiatric analysis on COVID-19 survivors is still ongoing, but according to one study in the medical journal “Brain Behaviour and Immunity,” initial findings suggest that patients with COVID-19 might experience delirium, depression, anxiety, and insomnia.

After the 2003 SARS pandemic, a study found that among those who survived it, more than 40% went through active psychiatric illness, most commonly PTSD or depression.

A landscape riddled with complexities

When dealing with an evolving and tumultuous mental health landscape, the specificity of demographics and socio-economic status is key. In countries with poor mental health infrastructure like India, this only compounds the issue of managing a post-COVID world.

In India, creating solutions and tackling a diverse range of mental health challenges across a vast population split between the urban and rural can be complicated, only compounded with the lack of mental health infrastructure and resources.

Banika Ahuja, Chief Psychological Officer at Youth for Mental Health, has been working to provide mental health services to the geriatric population through her start-up, B.Nuerofit. India has a population of nearly 104 million elderly, comprising a shade over 8% of the country’s population. Instead of solely relying on the government, she thinks the effort can start at an individual level.

“In India, we have so many stratifications and policies that will take years to implement,” Ahuja told Re:Set. “In the immediate, we can take up more individual responsibility. For example, if you’re working in a small clinic or a hospital, try to get a psychologist on board and similarly if you’re working in a private organization.”

The individual responsibility extends to the rural spaces too. Organizations like Unbottle Emotions, Make A Difference and Help Age India are providing services like social emotional learning, and resources for the elderly, where the government isn’t.

Ahuja explained the concept of ‘post-traumatic growth,’ as the neural plasticity of the human brain which allows us to learn and unlearn behaviours, and grow after traumatic experiences such as COVID-19.

“It’s how we build coping mechanisms and cognitive skills,” she said, and suggested a number of small steps to combat the side-effects of the pandemic. Students are developing lifelong behaviours right now and more time spent in front of their screen is having an adverse impact on their mental health. To tackle this, a coordinated strategy needs to be implemented including creating a curriculum which includes offline programs and scheduling in time spent outdoors.

The Government of India has a National Mental Health Policy, under the official title, “New Pathways New Hope.” It was launched pre-internet in 1982 and hasn’t been updated since 2014 while there has been an increased focus on mental health in the country’s political discourse. This month, members in the upper house of parliament demanded additional resources to be allocated to manage the mental health crisis engulfing the country.

“We already have a lack of mental health infrastructure, including education and training. The least the authorities can do immediately is have psychologically informed actions in place,” Ahuja implored.

What we thought of as normal before COVID-19 is gone.

Before amending or crafting a new policy, she explained, those making decisions should bring psychologists on board so they can create clinically informed actions. These can include smaller, more immediately implementable steps like what information to put online and what language is used to convey it. Additionally, bringing expertise will help the authorities form psychological help guides for private companies, schools, mental health practitioners and front line workers.

Mental health practitioners have been at the front lines of the pandemic, but it’s taking a toll on them. Among multiple professions studied in a paper in the Community Mental Health journal, students and healthcare professionals were found to experience stress, anxiety, and depression more than others. A recent nationwide survey by Suicide Prevention India Foundation (SPIF), also found, “more than 62% therapists admitted experiencing varied levels of caregiver fatigue.”

“I know of many mental health practitioners who have survived COVID-19 and struggled mentally after it,” Goel told Re:Set. During her own isolation, Goel realized that her mental health was struggling. She enlisted her family and friends to form a support group where they checked in with each other everyday and played games.

“Even if COVID-19 vanishes tomorrow, you can’t turn a switch on and go back to ‘normal,’ she said. “You can’t forget those experiences. Some dead bodies aren’t being returned to families; people are not being allowed to go through a typical mourning period which allows them to process grief.”

“What we thought of as normal before COVID-19 is gone.”