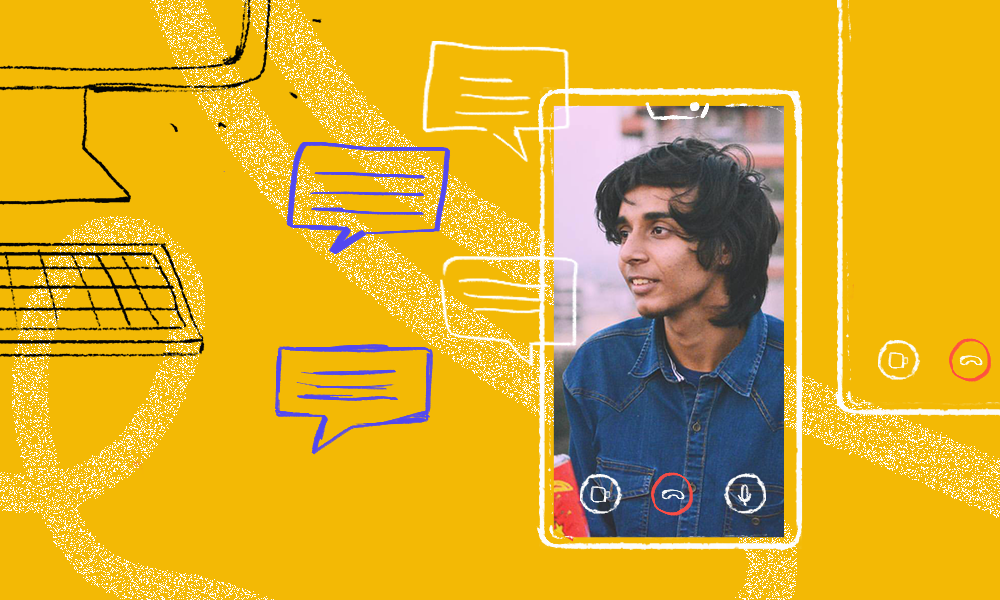 For Shashwat, a 21-year-old with long, shaggy hair and a love for music and Spotify playlists, life revolved around school a few years ago. “My world was very small,” the computer science student from Mumbai told Re:Set. Mental health remained an alien concept until he got a chance to decode what it means.

Depression has been familiar territory for Shashwat who first experienced his symptoms five years ago, unable to acknowledge positive emotions or happy memories. Fatigue became hard to ignore as he slept too much or too little, lashing out at others because of his state of mind. He didn’t know what it was or how to comprehend his feelings. Seeking help wasn’t something he considered until recently after being encouraged by his friends and reading up on mental health online. “I didn’t take therapy for a very long time because I was drowning in self-pity,” he said. However, when Shashwat realized he needed professional help he confided in his grandmother. She took him for a formal diagnosis to a psychiatrist, but the consultation fees, around ₹3,000 (~ $43 USD) for one session, threw him off. “I don’t want guilt attached to the healing process,” he said.

This prompted him to look for therapists online and he found a locally-based mental health professional who charged ₹300 (~ $4 USD) per session. Shashwat started therapy via video chats four months ago and he’s gradually learning to evaluate his feelings. “It [online therapy] is the cheapest [form of therapy],” he told Re:Set. “It has been a gradual process of self-awareness.”

According to Dr. Sonia Jaeger, a German psychologist who offers email and video counseling sessions to her clients across the world, online therapy can be powerful. “Video sessions aren’t that different from face-to-face sessions,” she explained. “It’s really interesting how easy it can be to establish a good relationship online.” Shashwat agreed. He finds it easy to relate to his therapist who is in her twenties like him and studied at a local institute he’s familiar with. “When you have the general plot of someone’s life, it becomes easier to trust them,” he said.

“It has been a gradual process of self-awareness.”

He did a bit of research before booking his first session. His appointments so far have focused on tracing his childhood scars and include freewheeling conversations about life. “The problem that I have is very chronic,” Shashwat told Re:Set. “I have an extremely low sense of self-worth. I am cynical towards life.” For him, indifference from his parents makes things tricky. “My father gives me money. That’s how this relationship [works],” he admitted. While his dad has asked about his decision to seek therapy a couple of times, his mother hasn’t broached the topic at all. His grandmother urged his parents to support him. “I have a very rational relationship with my parents,” Shashwat said. “We talk when it’s about finances, my work, and my studies.”

Online therapy comes in all forms including email counseling, video therapy, texts, chats and more. Social media platforms like Instagram make it easier to look up therapists, read up on their area of expertise and zero down on the right fit. Many sites offer clients the flexibility of chatting with their therapist based on their own convenience.

For 34-year-old Cindy C., an occupational therapist based in New York, online counseling was effective because she could chat with her counselor through discreet messages. “I sought out online therapy at the beginning of 2016. I had some issues that I did not feel comfortable talking to friends or family about,” she said. “My therapist and I messaged each other through the website. It was like sending my therapist text messages, and I would get email notifications when my therapist responded.”

Texts can be beneficial for people who prefer writing about their emotions instead, Jaeger said. “See what feels right for you. If you are someone who really enjoys the process of writing and journaling, email counseling might be an interesting option.”

While Cindy knew her method of seeking help was different from a traditional therapy session, she realized it gave her plenty of room to share her thoughts whenever she wanted. “I was very comfortable with my therapist,” she said. “It was professional, discreet, and I didn’t have to worry about stigma or cultural barriers. It was a lot easier for me to seek help online.” Online counseling gave her a chance to discuss her conflicts privately without feeling afraid and helped her focus on self-care and well-being. She was also reassured by the fact that her interactions were confidential. “In Asian families, there’s still some stigma related to mental health, but I can say that it isn’t as strong as it used to be in my family,” she said. “I was really fortunate to have close friends and family who were supportive.”

“It was a lot easier for me to seek help online.”

However, when it comes to online therapy, there is a flip side. With the rise of a plethora of options such as Betterhelp, 7cups, Basis and other websites that allow visitors to find a therapist or even talk to strangers and volunteer listeners, it’s essential to be cautious and ensure that all shared information is private and confidential. Verifying a counselor’s credentials and license is also crucial. “I have heard mixed opinions from both therapists and clients who have used these sites,” Ashlee Bennett, a psychotherapist based in Australia, told Re:Set. “The view I have currently is proceed with caution, do your research and ask yourself why you’re drawn to this method when there are other ways of accessing care.” She added that such sites often see high turnover rates, which makes it difficult to establish a reliable and trustworthy relationship with a therapist.

Shashwat plans to stick to his online sessions. “Something that I realized in the last session was that I’m able to rationalize things very quickly,” he said. “I have been more expressive [in public] about my lows,” he added, referring to his Instagram account where he documents his good and bad days. Shashwat has no qualms about destigmatizing mental health by talking about his experiences. “People’s understanding of mental health in India [is limited]. They picture a psychiatric ward,” he lamented. “There are so many things they don’t know about.”

Ignorance, Stigma and Public Attitude: Mental Health and Disabilities Are Still Mocked in India
The Parents’ Guide on Staying Sane During Exam Chaos