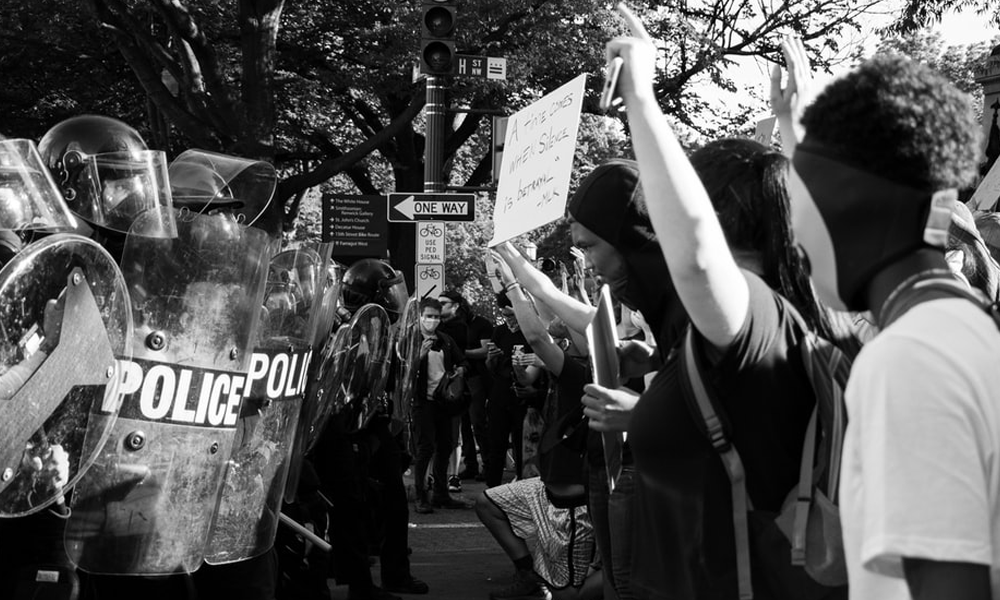 Protests have continued to rage across the United States after George Floyd, a black man, died in police custody last week. It has once again sparked renewed criticism against police brutality and America’s treatment of its black citizens.

People also took to the streets in Australia, Canada, Germany, and the United Kingdom to protest the systemic racism prevalent in America and their own countries.

We spoke to black protesters about the broken American justice system, the fault lines in society, and the impact the movement has on their mental health.

Editor’s note: all names have been changed to protect the privacy and safety of the protesters.

“We expect there to be a way to hold the police and racist people accountable before any more of my people have to die,” Morgan, a 19-year-old from Minnesota, told Re:Set. “I worry that my last thought before I die is ‘I hope someone is recording.’”

Having attended multiple Black Lives Matter protests, Morgan wants common sense and awareness from people. “Right now, all we can do is record the injustice against my friends and family. Multiple protests and riots should not be required for justice to happen.”

The judicial system is consistently stacked against the black community. Photo courtesy: Unsplash.

The protests are spanning across age groups and ethnicity with many young people stepping up to mobilize and organize.

“I brought my 13-year-old sister to see for herself what’s going on in the world and how we are fighting for her future as well as the future of our kids,” 20-year-old Kris from Louisiana, said. “I had to see my dad try to survive as a black man in America. [My dad] got sentenced to more years in prison for drug charges than George Zimmerman.”

“As soon as the pandemic is over and the world goes back to normal, black people and other minorities are still at risk of racism and police brutality.”

In 2012, Zimmerman was charged with the second-degree and hate crime for the murder of Trayvon Martin, a black 17-year-old student. Zimmerman’s claim of self-defense acquitted him of all charges in 2013.

In spite of COVID-19, people have continued to spread their message through peaceful protests on the streets. “Health risks aren’t a worthy deterrent because we as black people were already always at risk of dying,” Morgan reflected. “As soon as the pandemic is over and the world goes back to normal, black people and other minorities are still at risk of racism and police brutality.”

Protesters around the world march to bring awareness to the death of George Floyd after he died in police custody. Photo courtesy: Unsplash.

It isn’t always easy to protest peacefully, and people can be “very blatantly disrespectful and hateful,” she said, but recommends protesters “stop each other from engaging in negativity.”

It’s not the first time social media has been used as an integral tool to raise awareness, as the Black Lives Matter hashtag has been used to amplify black voices since it’s conception in 2013.

“Although it’s straining, it gives me the strength to keep on fighting for what’s right. It reminds me of why I’m doing what I’m doing and why it doesn’t ever end here.”

“Organization, information, and galvanization are the most important forms of activism on social media,” Morgan said. “Informing people is the creation of tangible change for us. We need privileged people to see that the world isn’t as peaceful as they think. They are more likely to empathize with us, attend a protest, and use their privilege for good. A big example would be when our white protesters form walls between us and the police to stop unprovoked attacks.”

The movement, however, comes with its own mental and emotional strain on those protesting. “I am surrounded by it [the movement], every time I unlock my phone or turn on my TV,” Kris remarked.

But, Kris and Morgan are holding onto hope for tangible change. They want people to understand the reality of racism. “Although it’s straining, it gives me the strength to keep on fighting for what’s right. It reminds me of why I’m doing what I’m doing and why it doesn’t ever end here,” Kris said.

“The death of George Floyd proved that regardless of the state of the world, cops will still take advantage of their power and systemic racists will always defend them,” Morgan said. “The only way we can deal with this is getting to a point where we believe we have done something to stop it from happening again.”

Also read: Four Ways to Talk to Your Parents About Racism

#BlackLivesMatter: How to Protect Your Mental Health as a Protester
Face Shields and No Toilet: Taking a Flight During COVID-19