From a Photo Project to a Support Group: Fighting the Stigma Attached to Alzheimer’s 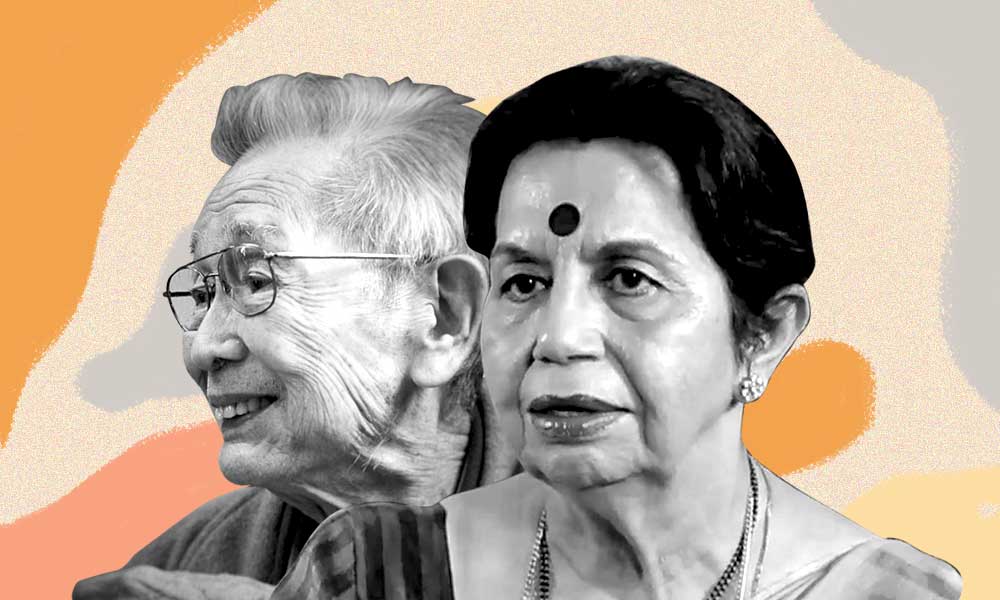 Editor’s note: This is part two of our series on living with Alzheimer’s, read the first part here where we focus on what it’s like to be diagnosed with early onset dementia. Alzheimer’s disease, associated with memory loss and a decline in cognitive functioning, remains one of the most prominent types of dementia around the world.

Eddie Sakai, 88, has an infectious smile that’s hard to ignore. He is thin, grey-haired and rather photogenic. He has many supporters on Instagram who follow his journey with Alzheimer’s documented by his nephew Glenn Nishida, who captures their highs and lows through powerful posts.

“Uncle has turned into somewhat of a celebrity,” 60-year-old Nishida told Re:Set. “When we go out, people come up to him and say, ‘Hi uncle.” Nishida, who is a professional photographer and a former healthcare worker based in Hawaii, U.S., decided to chronicle his uncle’s everyday experiences weeks after Sakai moved in with him. “Caregiving is the hardest thing we have ever done,” Nishida said.

His Instagram account is peppered with references about his uncle’s struggles and triumphs. In a picture that includes his thoughts on helping Sakai cope, Nishida opened up about his uncle’s health. “Looking back at his first notes [Nishida’s journal entries tracking Sakai’s progress]. I’m glad the anxiety isn’t so bad anymore,” he wrote. “His dementia is worse…can’t remember why he is in the bathroom, or to put his new briefs on.”

“Caregiving is the hardest thing we have ever done.”

Sakai is a former Marine Corps sergeant and was the only one in his family to graduate from college. He is single and doesn’t have kids. “He was the uncle that spoiled us rotten when we were growing up,” Nishida reminisced. “We all looked forward to opening his gifts on Christmas. Always very generous.”

The first time Sakai fell, he was out on a morning walk in 2011. The doctors diagnosed him with a subdural hematoma, which is the result of a brain injury and indicates internal bleeding. Surgery was recommended, but was deemed too risky to be performed at Sakai’s age. He then spent a month recuperating from his injuries and the bleeding eventually stopped. For a few years post the incident, Nishida and his family communicated regularly with Sakai and scheduled visits to his place. “He seemed fine,” Nishida said.

Eddie Sakai’s journey through Alzheimer’s is being documented by his nephew. Photo courtesy: Glenn Nishida

One day, in 2015, Nishida received a call from Sakai’s doctor with an update. “Uncle never made it to his appointment that morning,” he recounted. Despite several attempts to get in touch, he couldn’t reach Sakai. Hours later, he tried again and grew worried, asking Sakai’s neighbor to check on him and make sure he was OK. “She called me back and said uncle was in his car and that he will call me when he has time,” Nishida told Re:Set. However, he didn’t hear from Sakai all day. After another unsuccessful attempt to connect with his uncle at 5 p.m., Nishida called the neighbour again. “She called me back saying uncle was still in his car,” he said.

Now alarmed, he drove for 45 minutes to Sakai’s place. “I was shocked to see [his state],” he said.  “He was suffering from malnutrition, he smelled and [was] clearly not taking care of himself.” This prompted him to call 911 and take Sakai to the emergency room for immediate medical intervention. Sakai would spend the following two months in the hospital and at a rehabilitation center, recovering. A major part of his expenses was handled by the family and he was diagnosed with Alzheimer’s disease.

“The MD said if we had not found him, he would have died in a few days,” Nishida reflected. “After he was discharged, my wife and I decided to bring him home because our kids are all grown up and we have room.” Social Services and the U.S. Department of Veteran Affairs have started contributing to his treatment costs, making medical expenses less stressful.

Alzheimer’s can be crippling in terms of restricting freedom and increasing reliance on family members. As per Dr. Manoj Rajani, a Mumbai-based neurologist with nearly two decades of experience in the field, it’s often impossible for patients to maintain their independence after they start developing symptoms associated with Alzheimer’s, such as memory loss and confusion. They tend to forget familiar routes and can’t figure out how to get home. People eventually struggle with everyday tasks, judgment and planning. “Patients require a lot of attention and care,” Rajani explained, adding that loved ones need to ensure that the elderly members in their family are not neglected. A sudden inability to perform tasks they were previously comfortable with is a warning sign, he added. “We have to keep our eyes open for any early signs of memory loss.”

Also read: The Rollercoaster Journey of Parenting While Living With a Chronic Illness

For Dr. Sushma Chawla, a general practitioner and Alzheimer’s activist based in Delhi, India, her first brush with the illness was in the 1990s. After her father passed away, Chawla realized her mother wasn’t herself. “I noticed some changes in my mother’s mood[s],” she told Re:Set. Her mom would cry often and express fear, calling up Chawla and asking for her own mother.

Initially, the family believed that her husband’s death had taken a toll on her. Later, Chawla consulted a neurologist when her mom’s condition did not improve with time. “They thought it was depression,” she said, citing a lack of awareness associated with Alzheimer’s and dementia in India. “Things have not changed even today,” she emphasized, referring to how the illnesses are still stigmatized and not spoken about in the country.

Nishida has chosen to speak up about Sakai’s illness in a bid to fight the stigma. “Being of Asian descent, we never talked about our family’s problems with anyone. I think a lot has to do with shame. So I really felt strongly about trying to get the word out,” he added. “Even though uncle does not comprehend sometimes or remember anything, I asked him if I could do this and he answered, ‘If my condition can help other people, yes, let’s do it.’”

For Chawla, a fainting episode and further medical consultations years later made her realize her mother had Alzheimer’s and asked her to move in with them. Her health, however, continued to deteriorate and she passed away six months later in 1999. The incident left Chawla shaken. Experiencing Alzheimer’s on such a personal level sensitized her to the cause. She became vocal about its symptoms and the crucial role of caregivers, setting up a non-profit organization called Hope, Ek Asha in 2001. “People were not even aware [that] such a disease exists,” Chawla said. “We moved forward with the aim of creating mass awareness.”

According to the Alzheimer’s Disease International, India has over four million people with dementia.  Only a handful of organizations cater to the needs for patients with Alzheimer’s and dementia including Alzheimer’s and Related Disorders Society of India (ARDSI), Nightingales Medical Trust and Echoing Healthy Ageing. Alzheimer’s and dementia are often attributed to old age and aren’t treated seriously by the general population as people assume that being forgetful is a normal part of the aging process. Alzheimer’s is considered the most prominent type of dementia that shows up in around 60 to 70% of dementia patients.

“People are always in denial.”

At Hope, Ek Asha, patients and caregivers bond over collaborative activities such as word-building and laughter yoga. For the former, participants are prompted with a long word on the blackboard and are asked to suggest shorter words. “[These activities] help stimulate the brain,” Chawla explained.

Typically, families approach her after they’ve received the diagnosis and are unsure about what to do next. “They [patients] have difficulty bathing, eating food and maintaining a routine,” she said  At her organization, they offer interactive sessions, training for caregivers and online support. “The family is devastated [after a diagnosis],” Chawla told Re:Set. “People are always in denial.”

Her team is currently focusing on starting a daycare center for patients with the condition. Chawla has been working on spreading awareness and initiating conversations centered around the disease for 18 years now. She credits her mother as her motivation for still being involved in the field. “My mother managed everything so well,” she said. “She just dwindled away into the past [after her diagnosis].”

For Nishida, documenting his uncle’s journey has been an eyeopener. Ever since he started posting content, he’s received plenty of messages from people across the world which made him realize that him and his family are not alone in this. “Slowly, with the blessing of uncle, we turned it into Project Alzheimer’s 365. I shot a photo of uncle every day for a year. The good and the bad,” he said.

In a powerful photograph, Sakai is seen sitting alone on a bus. “Remember when you were a kid and got lost?” Nishida wrote. “That is what uncle feels like 24/7.”

Memes and Mental Health: It’s Not Fun, but at Least it Can Be Funny
Beyond Movember: Indian Men Open Up About Emotions and Masculinity