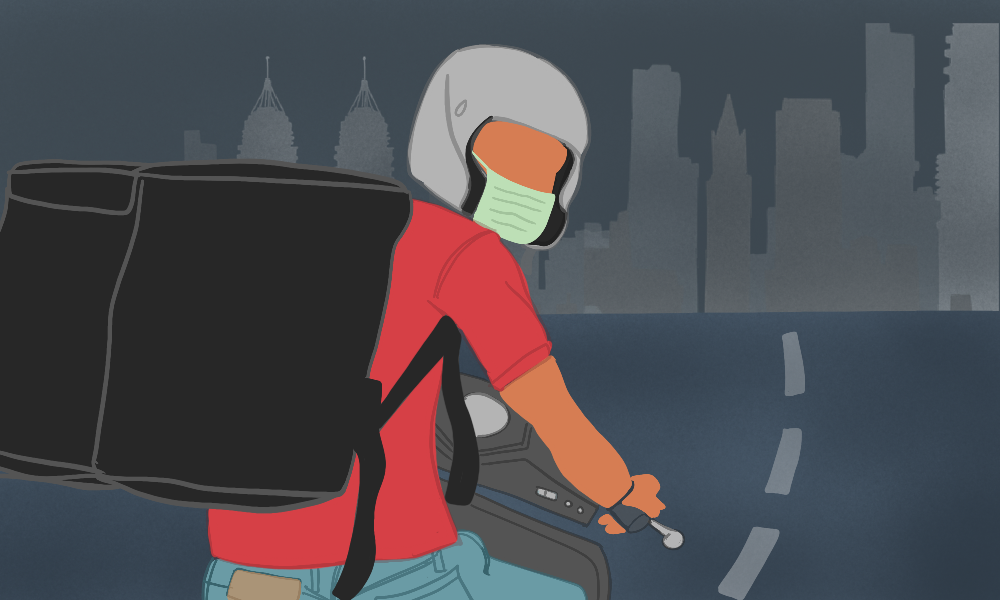 "Whatever I earn goes to servicing monthly payments, so I have to continue working." Illustration by (c) Reset Fest Inc, Canada

Naved Shaikh wakes up around 9 am every day and gets ready for work. In a country under complete lockdown due to COVID-19, food delivery workers are still on the road and people are still ordering pizza and want it in 30 minutes or less, so Shaikh pulls his beloved bike out of his tenement in Mumbai and heads to work.

The coronavirus pandemic has impacted an already reeling Indian economy. The World Bank thinks the country will grow this year at the slowest pace in three decades.

It’s unsurprising then that 23-year-old Shaikh has to work. “There’s pressure and fear of going to work,” he told Re:Set. “What will today be like? But I’m the only breadwinner in a family of seven, and we don’t have much savings.”

The only upside is that roads are “fresh and silent,” a rarity in a city like Mumbai known for its infamous traffic. He even sees pigeons on the roads that are now devoid of footfall. The police are co-operative, as long as those on the roads wear masks. Shaikh has breakfast at home before leaving, and for lunch, there’s leftover pizza at work.

Customers, especially bachelors, are appreciative that Shaikh and his fellow companions are still out on the frontlines in their own way. “We had stopped delivering for two weeks, but starting delivery again has helped customers who can’t cook at home,” he said. “I try to stay safe. We have instructions that we have to stay one metre away from customers, to wash our hands with hot water and to use sanitizer every 30 minutes. I always wear a mask.”

His family, despite only consuming news on YouTube, is scared. “They tell me to not go out for work, but saying no doesn’t end the problem. I have left everything up to god now,” Shaikh added.

Shaikh has only ever known this one job. He failed grade 10 and lost interest in studying. His father, a rickshaw driver, had retired by then, so the family needed money. He joined the unorganized workforce aged 18, starting with driving around air conditioner repairman for ₹1,500 ($196 USD) a month. He moved to Amazon for more money, and after multiple appraisals and job switches, he currently makes ₹ 17,000 ($223 USD) a month delivering pizzas.

“Some of my friends have been able to stay at home during the lockdown, but I can’t,” he said. “I have taken out personal loans for my sister’s wedding and for my motorcycle. Whatever I earn goes to servicing their monthly payments, so I have to continue working. I’m not even paying the principal amount, as I’m stuck paying off interests. I don’t know when this [loan cycle] will end.”

It’s only around 4 pm after all the flurry of lunch orders have been dispensed with that Shaikh takes his pizza lunch. After three more hours of delivering, he gets home around 8 pm. Not infecting family members, especially older parents is key, so he bathes, changes clothes in the community bathroom before finally meeting them. “I was scared at the beginning of the lockdown, but I have to work, and now it’s become routine,” he told Re:Set.

After dinner and finally in bed, with time to himself, Shaikh dutifully whips out his phone, which itself has been a blessing and a curse. He had to sell his previous device and buy this new one as the pizza delivery app wouldn’t work properly on it. People at work told him to upgrade, so he took out another loan for a newer model.

The blessing is that it has a better screen and sound system, so he can consume the only content he enjoys: TikTok and rap music. “I’ve been into rap since Honey Singh, and other diss tracks. My new favourite song is Emiway’s Phir Se Machayenge. He’s great as he talks in the Mumbai gully slang, and I connect with it.”